Free Shipping Over $90!
I speak
and my currency is 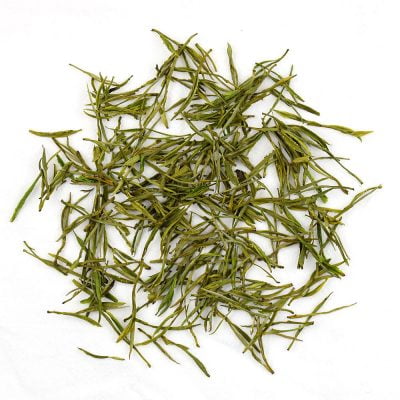 Lushan Cloud-fog is one of the top-quality green teas which produced from Lushan Mountain in Jiu Jiang City, Jiangxi province. It is named after its producing area – Lushan Mountain. Lushan Yun Wu tea has been listed as a tribute tea since the Song dynasty. It was first planted in Buddhist temples and was called ‘Buddhist Tea’ in China. This tea originated from the Ming Dynasty, many literary wrote a lot of well-known beautiful poems about Lushan Yun Wu.

Lushan Cloud-fog has stout tea buds covered with plenty of white fuzzy. The dry tea leaves are tightly curled. The taste of this tea is sweet and has a long-lasting aftertaste and very fresh and clean mouthfeel, just like tasting the tea leaves of the tea trees grown on the high mountain. That mountain is as high as being almost touching the moon, surrounded by freshest air, clouds and fog.

The tea soup is clean, brighten, and in jade yellow-green color. The tea is abundant in tea polyphenol and leaf extract, as well as tea alkaloids and vitamin C.

Adjust the amount of tea based on your own taste

It is recommended using Top-drop method to infuse the tea. You can also try the bottom-drop brewing method.

Lushan Mountain, the hometown of Lushan Cloud-fog tea, located in Jiu Jiang City, Jiangxi province. The altitude of the main tea plantation is over 800 meters. The climate there is mild. The temperature difference throughout the year is very small compared to that between day and night – It is cool in the morning and evening, but hot at noon. It is warmer during the daytime which enables tea trees to produce more organic substances. The consumption of organic matter is reduced because of the weakening of respiration during the cold night. This also increases the difficulty of sugar condensation and the formation of cellulose. This is conducive to the accumulation of organic matter inside tea leaves and increases the content of effective ingredients such as amino acids, caffeine and aromatic oil, which makes Lushan Yun Wu tea tender and fresher with very high quality.

The rainfall there is also abundant which causes a large amount of water vapor. Together with the water vapor formed by lakes and rivers nearby, the Lushan mountain is surrounded by the sea of clouds and mists, in almost 195 foggy days of a year. The annual precipitation is from 1000mm to 2000mm, with a relative humidity of 80% and more. This forms a superior environment for growing tea trees.

The soil layer there is thick but loose, with plenty of organic substances. The PH level is around 4.5 to 5.5.

Our Lushan Cloud-fog comes from the tea plantation located at the high-altitude part of Lushan. As a result, it grows slower because of the low temperature. That is also the reason why the picking activity normally sits near mid-April, late-April and the beginning of May.

The picking standard of this tea is “one tea bud with one leaf”. The second tea leaf will only get picked if it is as tender as the first one.

Lushan Cloud-fog tea contains tannin, vitamins, amino acids, and tea polyphenols. It has the benefits of clearing body heat and removing toxicity, detoxify and aiding digestion, which is an ideal tea drink in summer.

We have flat rate shipping for all orders. Please see the below chart for reference.

We will dispatch your order within 24 hours (Mon-Fri). The delivery time would vary based on your location (we are using AusPost for the delivery). In most of the cases (after dispatch):

There are no reviews yet.